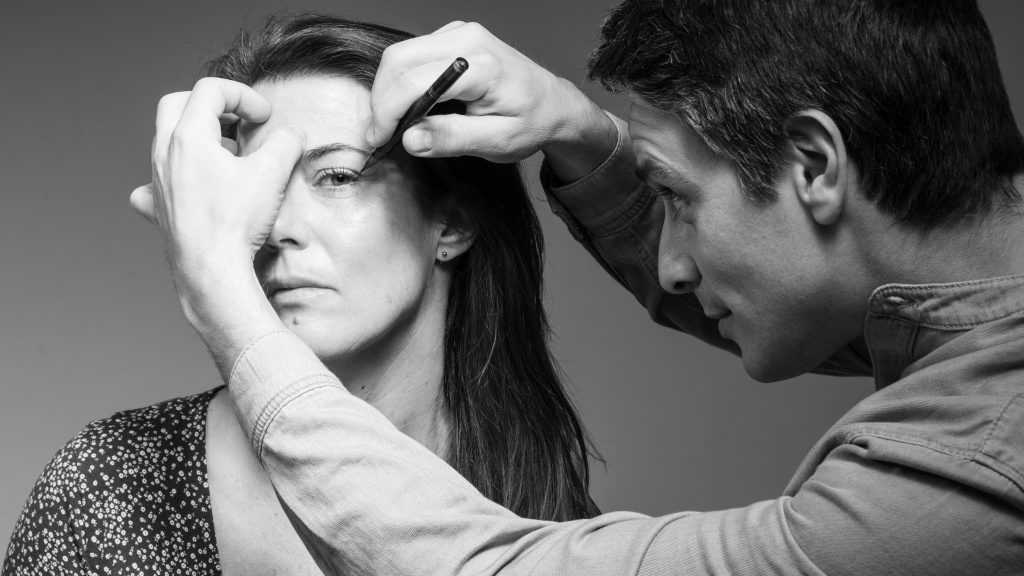 Our eyes are not immune to the passing of time — nor, often, are the tissues surrounding them. This is unfortunate, given the value of our eyes, in both functional and psychosocial terms.

With skin getting progressively thinner and less elastic and the tissues behind it losing volume, tone or both, the eyelids can experience stretching and sagging, drooping, hollowness or malposition.

Though these changes mostly form part of our natural aging process, they are often accelerated by long-term exposure to sunlight, smoking, alcohol and certain nutritional choices that we make.

The upper eyelid, the more complex and well-developed structure of the two lids, functions as the main shutter of the eye, but also as a tiny and precise windscreen wiper. Its blink, a carefully executed role, lasts less than a tenth of a second and acts to wash and lubricate the eye’s surface, or occasionally to protect it. When not blinking, the eyelids must provide a wide enough aperture to allow the full visual field that our eyes are capable of seeing. They also aesthetically frame our eyes and as such play a vital role in our perception of their beauty.

By our 60th birthday, our upper eyelids — which have by then blinked more than 160 million times — have sustained many of the tissue changes described above.

As a result, stretched and heavy skin may have contributed to a “hooding” effect over the upper lid, or sometimes even the lashes. More severe cases of this condition (called dermatochalasis and estimated to affect more than one in six adults over the age of 45), are likely to obscure the upper part of the field of vision. Even in less advanced cases, patients will often describe unpleasant heaviness and a tired forehead – sometimes even a headache – by the end of the day, originating from the constant compensatory attempt at keeping the eyelids high.

With aging of the lower eyelid, the loose skin and forward-moving fat pockets will often result in wrinkles, hollows and bags under the eyes, giving an older and tired-looking appearance and while this is very rarely a sinister clinical sign, it sometimes detracts from the attractiveness of the eyes.

What is a Blepharoplasty?

Blepharoplasty surgery, one of the most commonly performed eyelid surgical procedures, addresses the contour of the upper and/or lower eyelids. When carefully executed by a certified eyelid surgeon, it is a very safe and straight-forward, minimally invasive day case procedure which can be extremely effective in restoring a more youthful, fresher and less tired appearance; also in reducing wrinkles and puffiness.

What does the surgery involve?
Both upper and lower eyelid blepharoplasty can be carried out under local anaesthesia, intravenous sedation or general anaesthesia, depending on your preference and what is deemed safest.
Fine incisions are designed which follow the natural lines of your eyelids – in the skin creases of the upper eyelids and just below the lashes in the lower eyelids. Through these incisions excess skin and protruding fat is removed.
If you have bags in the lower eyelids without any skin excess then fat can be removed using a small cut on the inside of the lower eyelid (transconjunctival blepharoplasty) that avoids an external scar altogether.
Following surgery, the incisions are put back together with fine stitches that are removed after 6-10 days.
At the end of the procedure, antibiotic cream is applied over this area. Mr Koutroumanos will ask you to apply a similar ointment three times a day for five to seven days post-operatively.
Bandages or padding are very rarely used and if required this will almost always be applied for a short period right after the procedure and removed by Mr Koutroumanos before you head home.
What can I expect immediately after surgery?
Recovery following upper lid blepharoplasty is fairly prompt with 1-2 weeks of variable amounts of swelling and sometimes bruising in the eyelid skin. Depending on your activities and line of work, Mr Koutroumanos will advise anywhere between 1-2 weeks of down time but most people can resume most activities within a few days.
Lower lid blepharoplasty is likely to lead to a slightly longer period of recovery with some patients experiencing up to four weeks of gradually reducing eyelid swelling.
You will be able to get up and about on the evening of the operation and minimal pain is to be expected if any, easily controlled with simple painkillers.
It is important to note that the amount of bruising and swelling as well as their speed of recovery varies from individual to individual.
Both however can be improved by using cold compresses and sleeping propped upright for the first few days after surgery.
It is important to remember that you will not be able to drive or operate machinery for 48 hours after a general anaesthetic and 24 hours after intravenous sedation.
Other than the application of the ointment, wound care is not complicated. You should try to keep the wounds dry for the first 48 hours, after which period gentle washing (but no scrubbing) is safe. By the time sutures are removed, around day-6 to day-10, normal washing can be resumed. Make-up is best avoided for the first 10-14 days post-operatively.
It is It usually difficult for other people to perceive that you have had upper lid blepharoplasty after the end of the second post-operative week. With the eyes closed, the healing scar might be visible for up to 6 weeks but it is extremely unlikely that a scar will remain visible after this time following either upper or lower lid blepharoplasty.

Are there any reported complications?
• Scars There will be scars from the surgery. These will usually be red at first, then purple, and then fade to become paler over a few weeks to months. Most scars following blepharoplasty become virtually invisible. Very rarely, scars may become wider, thicker, red or painful, and you may need to have surgery to correct them.
• Bleeding Bleeding into the wound or the eye socket is very rare but possible. There have been very rare reports of uncontrolled bleeding into the eye socket resulting in visual loss.
• Infection in the eyelid skin is incredibly rare. If you get an infection of the wound you may need antibiotics or another operation. This can affect the final result of the surgery.
• Increased or reduced sensation After the surgery, the skin near the scar can be more or less sensitive. In rare cases, the change in sensation may be permanent.
• Asymmetry This is where the eyes are not symmetrical. Almost everyone has a mild degree of asymmetry, and the mere process of undergoing eyelid surgery may make you much more aware of this.
• Eyelid position For the first day or two after the surgery it is quite common for the eyelash line of the lower lid to be slightly pushed away from the eye due to swelling. This will usually settle on its own or with simple dressings, but you may need another operation. If too much skin is removed, it can cause your eyelid to be so tight that you cannot close it properly. This can lead to the surface of the eye getting dry. If this is severe, you may need a small skin graft.
• Unsatisfactory result Sometimes, patients are not satisfied with the result of their eyelid reduction. This may be to do with the look or feel of the eyelids, or the shape of the eyelids not meeting expectations. It is very important that you talk to your surgeon, before you have the surgery, about the outcome you want, and whether this can be safely achieved with a good outcome. A very small number of patients need another operation to get the result they want.
• Change over time The result of an eyelid reduction usually lasts for five to 10 years and can sometimes be permanent. The appearance of your eyelids will change as a result of ageing, sun exposure or other circumstances not related to your surgery. You may need more surgery or other treatments in the future to maintain the results of the eyelid reduction.
• Allergic reaction Rarely, allergic reactions to tape, stitches or solutions have been reported. If you have an allergic reaction you may need extra treatment.

Call now to book a consultation

Dr Nick Koutroumanos is a London based Ophthalmic and Oculoplastic surgeon, with particular subspecialty expertise in ophthalmic plastic and reconstructive eyelid, orbital and lacrimal surgery for both adults and children.